There is a more artful way of saying what I mean here…be quiet, for one. Stop talking, shut up, you talk too much for other less artful examples. One of the best ways to express what I want to talk about today came from Rima Ports, an attorney friend of mine. She would use this line when out networking and I got a kick out of it every time. Rima would say, “I have two ears and one mouth and I use them proportionately.” I loved it! How perfectly succinct, and when you threw in her hand motions and charming smile it was priceless, who else would you go to for asset protection (here she would grab her ass) and estate planning? But I digress.

Rima had it right, we all have two ears and one mouth but very few of us use them proportionately I have found that 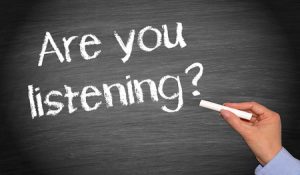 I long for the days of my youth, sitting on my grandma’s porch and actually talking, discussing topics of the day, events in the family or the latest trends. There were pauses between each speaker, because they were thinking about what the previous speaker had said and they were giving it its due respect and consideration before responding. Even if a disagreement occurred, there was respect given to each other’s argument and in the end a handshake and an “agree to disagree” pact was made and things moved on. 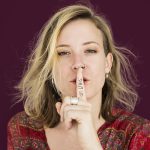 is no civility, no listening, no respect, no understanding of what anyone else is saying. It is baffling to me that any real business is actually getting done. What I hear when I sit and listen is man A bragging about his business to man B, then man B brags about his business to man A, then Man A brags some more then man B brags some more…you get the idea. How in the world does that result in business?

When I meet with someone new and I say, tell me about yourself and your business, they generally do not have a problem telling me a lot of surface info, and that’s fine for an introductory meeting. But when it takes up the entire hour and then they have to rush off to their next meeting without asking anything about me or my business, well, that is just rude.

This ‘all about me’ culture is not pretty and it cannot last, because, ultimately we need each other. We need each other to survive this life, both professionally and personally. So we need to start listening to each other and stop talking so much. We need to listen to each other and give the proper weight and respect due to what the other person is saying before responding. We need to consider what we say before we say it and think about the effect it will have on our listeners. The art of listening is not the only lost art, the art of speaking is lost as well and what we are left with is just a lot of yelling and not a lot of communicating.